You already know by the mere fact that I live in Florida that I do not love the cold.  But I do find it fascinating how a place can look cold.  I don’t mean like covered in snow and sleet, a bit more subtle that that.  Take a look at this picture. 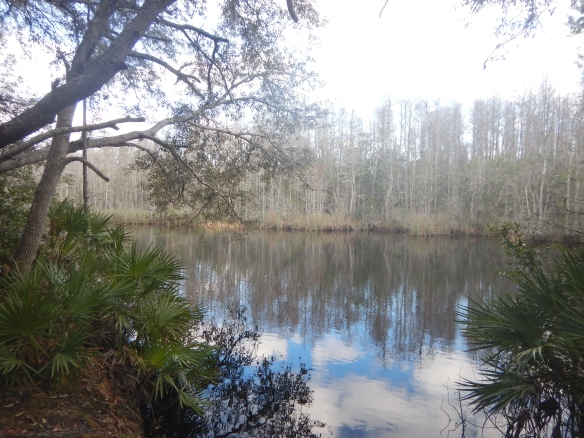 With the blue sky reflecting off the water and the green little palms in the foreground I don’t think it looks cold at all.  But look again.

This picture was taken from the same spot not even a minute later, I just took a couple of steps forward and turned slightly to the right.  To me, this picture looks like it was taken in a place that was very cold.  Which it was if you count Florida cold as cold (I do).

I don’t know why but I find it fascinating that just turning a slight bit can give you such a different perception of the world.  I can’t help but compare it to people’s mental perception.  Ever wonder why some people seem to be upset and offended by such tiny little things?  I know that I do.

I always try to chalk it up to the fact that everyone has a different view of the world which depends on their lives so far and I think a little on the attitude that they fall into the easiest.  The thing I try to remember is that both perceptions are real, both pictures reflect unaltered reality. It’s not even a matter of what people choose to see, because you don’t have any way of knowing what you would see if you chose to go a little to the left or a little more to the right.

I guess the moral of the story is there is always another way of looking at the same thing.  The next time you are talking to someone and the two of you just can’t see eye to eye, instead of trying to change the other person’s mind try seeing their point of view or at least a view a step or two to the side of your own.