Remember how much fun I said Tae Kwon Do was? Well I was telling the truth, it is.

However.   I also mentioned that the class was mostly kids.  As in most days there was only one other adult and some of the kids were as young as maybe 9.  That didn’t make the class any less fun, but it did make it perhaps a bit less challenging after a while.  So the kids (mine, not the ones in the class) and I decided to look for a different dojo that  maybe had a few more adults and that didn’t want us to belt test as often.  The dojo we went to was good and the teacher was great but it often felt like we were just teaching to the test, meaning learning just what we had to know to get the next belt and not really learning as much as I’d like.

We found one!  Just one small thing… we couldn’t find a single Tae Kwon Do place with adult classes that both had classes as many nights as we want to go AND weren’t so expensive I’d have to get another mortgage on the house for the three of us to go. So we’re trying out an MMA place.  A little bit intimidating?  Gosh, I don’t know, let me just tell you about the place.

You pull into the parking lot and you just see the bar and a liquor store.  Two of my favorite places, awesome!  But where is the place I’m looking for?  Oh, look up. It’s over the bar.  There is a little not too lit door between the two places that leads up a dark, steep set of stairs and you can’t actually see what’s at the top till you get there. 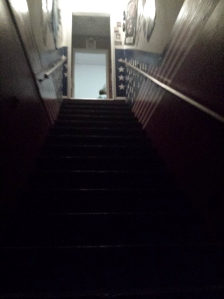 Once you get in the gym though, the place is awesome.  I’m sure the bar is awesome too, I just haven’t had a chance to find out yet. But you know I will. Oh wait, we were talking about intimidating.  Did I mention that actual professional and amateur fighters are training with you in some of the classes? Ya…

We went with this place because it has 2 classes a night, 5 nights a week.  That means if I want to go out one night, no worries I can easy make it up another night. They offer MMA, Brazilian Jiu Jitsu, Karate/Judo, and cardio kickboxing classes.  Pretty cool, even I won’t get bored with all that to choose from. Everyone is crazy nice and I’ve tried the MMA class twice without even getting injured.  Score!  I’m so looking forward to trying the other classes, I’ll let you know how they go.

1 thought on “Finding a New Dojo”