With the year wrapping up everyone is creating lists of this and that to sum up 2013.  Top 10 this, worst 10 that, they’re everywhere and actually I have fun reading them.  But there are a couple in particular that really caught my attention.

I read 2 or 3 that were different lists of the ‘craziest workout trends’ of 2013.  I read about something called prancercise, which I’ve never heard of but people I asked about it have. I read about exercising wearing a gas mask to limit your oxygen while working out, I guess to mimic high altitude, I’m not really sure. There was also more common things like hot yoga, naked yoga (um, no), aerial yoga (I’d break my neck), and paddle-board yoga, which I would so try. I would fall a lot and it wouldn’t be all that peaceful,  but it would be so much fun who cares?

But what was the one thing in common on all the lists I read?  Mud runs!  I so protest!  I can’t argue that they aren’t a phase, because I can’t see the future and they may very well be. I hope not, but who knows. But I can say that I don’t go to a mud run to get a work out, I work out to be able to do mud runs!

My first mud run was Mud Crusade.  I had so much fun that as soon as we finished I wanted to go back and do it again. It was the perfect first run because it wasn’t overly easy but it wasn’t wicked hard either, I was able to do everything though some of it was a struggle.  Perfect. 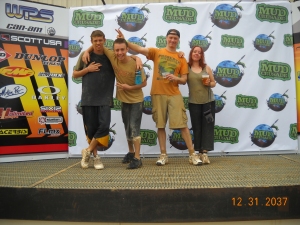 I actually ran it on accident.  I had toyed with the idea of doing a mud run but I knew I wasn’t really tough enough for something like that.  I saw the advertisement for Mud Crusade and told my boyfriend it was too bad that I wasn’t ready yet because that one was right up the road from me. He misheard me and said sure, he’d do it with me.  Um, what?   He doesn’t even run.  So we both signed up and have been hooked since.  And to this day we both argue that our first run was the other person’s idea.  Take my word for it, it was his.

I am absolutely positive that doing mud runs is what finally got me hooked on and loving running.  Not that running isn’t great and all, but if I get to run through a playground, well, you can’t beat that!  I will say that I haven’t done any of the runs that have a ton of electricity you have to run through (though I did crawl under slightly electric wire once or twice) or jump from roof height or anything like that.  It’s just not for me but more power to those that do.

But I’m curious.  Are mud runs ‘crazy workouts’ or just a phase?  What do you think? And either way, is there anyone out there that has done one and didn’t want to immediately go back and do another?

13 thoughts on “Are Mud Runs a Crazy Trend?”