This week I went from one extreme to the other – trying my best to avoid using oil where it’s always used for breakfast and then frying my burritos in oil for dinner.  Variety is the spice of life and all!

I love starchy foods.  Just putting that out there.  Potatoes and pasta are a necessity in my diet – maybe the Italian side of my family’s fault?  I don’t know but hash browns and potato cakes are always a win to me.

Since I’m aiming for healthy vegan I decided to see if I could make these without oil too and they actually turned out!  I expected to need to broil these to brown them but they turned out crispy and brown without broiling them.

Oh, and I was planning on adding unsweetened almond milk to them but all I had was vanilla which didn’t sound very potato-ee so I just skipped that.

Pan fry the onion and garlic in their own juices 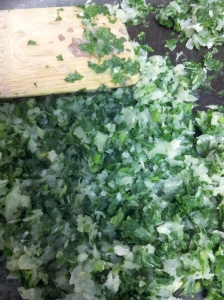 Mix everything into the potatoes and mash some more 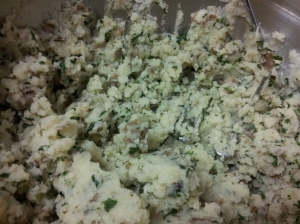 Bake for  15-20 minutes each side (bottoms should brown)

They brown MUCH nicer on the bottom oven rack and using a light-colored non-stick pan didn’t really work as well as an old-fashioned dark cookie pan.

I dipped them in ketchup because that’s how you eat fried potatoes and deemed them a success.  Good thing since I made enough to heat up before work all week! 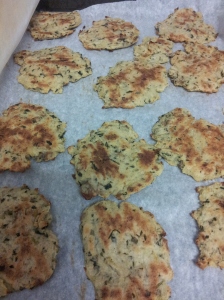 My grandfather made me a pot of vegetarian marinara for Christmas dinner and I’m cheating by using that for spaghetti for lunch – easy and by far the tastiest pasta sauce on the planet. He is one of the people who originally pretty much thought I’d die when I told them I was going to be vegetarian and now he’s practically one  himself so we’ve come a long way for him to make me my own pot of sauce!

After soaking pinto beans for about 16 hours ( a trick I found on accident for better tasting pintos) I crock-potted them with nothing but the leftover chipotles in adobe sauce from the can I opened last week (after running them through the ninja).  No added spices or anything.  It was the slacker-est pot of beans I’ve made yet and the first one to meet the full approval of my less than easy to impress children of the corn.

We put some in a small tortilla with chopped onions, tomatoes, lettuce, cilantro and salsa and fried them for a couple minutes in a pan with a bit of oil in it.

My kids were more than amazed that I fried something.  They asked – isn’t that bad for you?  I told them it was and they immediately deemed it the best meal ever except for the part were there weren’t any seconds. Of course.  Actually, it was though – if you’re gonna have a splurge meal then do it with chimis, they are awesome. 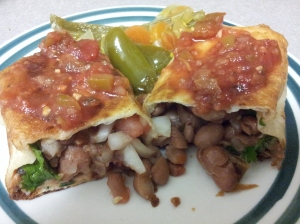 I had pickled jalapenos and carrots (from a can) as a side.  Not my healthiest vegan meal but definitely one we’ll be doing again!

Oh, and Lelo was down with every meal, she just sits attentively waiting for me to finally give in and feed her whatever I may be cooking! 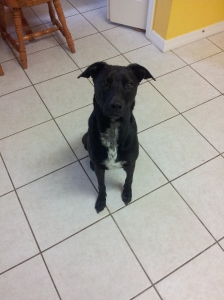 I can’t decide whether or not it’s awesome that my biggest fans in the kitchen are all three dogs.  I guess I’ll take it.

Do you think that using oil to cook with is a bad thing?  Does it make a difference to you if it’s used as an ingredient or to fry something?