I have a treadmill my grandparents gave to me that I keep in the garage but I don’t use it as often as I thought I would. As most people will tell you it’s boring and since it’s in the garage it’s also super hot; running outside is more comfortable for the most part. I taped a poster of sharks in front of it to look at while running, but it still wasn’t the most exciting thing to do.  Then, it got stuck on the highest incline.  Then, it just stopped turning on.  Not good, but it didn’t matter too much since I so rarely used it.

However, I live in Florida, lightning capital of the universe. The weather will be great, I get dressed for a run, get my running watch on, get the headphones from my son to listen to Zombies, Run!, walk out the door, and a lightning storm starts.  Often. So when I had the chance to get a treadmill that works for $50 I didn’t turn it down. 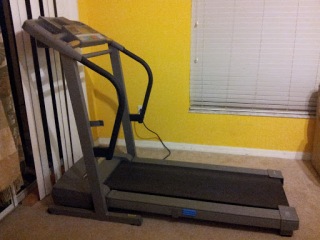 This time I put it in my living room.  It faces the sliding glass door since it would have to be pretty much in the middle of the room to face the TV and I rarely watch TV anyways.  But it does sounds like a great thing to do while running! I can’t help but think I would run a lot further if my mind was more occupied.  Sometimes I quit running simply because I get bored.

So far that hasn’t happened.  I listen to music and Zombies, Run! and watch the numbers go up (calories, distance, things I don’t pay attention to like carbs, how do you burn a particular number of carbs?).  Somehow just zoning out, watching the numbers change and thinking about my form the time just flies.  Maybe it’s because I’m in air conditioning, maybe it’s because I’m not listening to see if something is following me, or maybe it’s just because it’s new again I just don’t get as bored or as tired as quick as usual.  I’m 100% certain air conditioning has a lot to do with it.

I still intend to run outside a lot but it’s nice to have an alternative on the nights filled with lightning.  Like tonight. I can see some major benefits to both running outside and inside.

Long story short?  I don’t care which one is better I love having both options!