Have you ever gone somewhere that was so cool you knew you’d have to go back and then when you got home you realized that you didn’t know where you’d been? Well, me either. Much.  On my recent trip I stopped at the Great Smoky Mountains national Park. It was great, I totally plan on going back.  So I googled it just now and found out there’s like 5 of them and I have no idea which one I was at.

Lucky I got pictures. 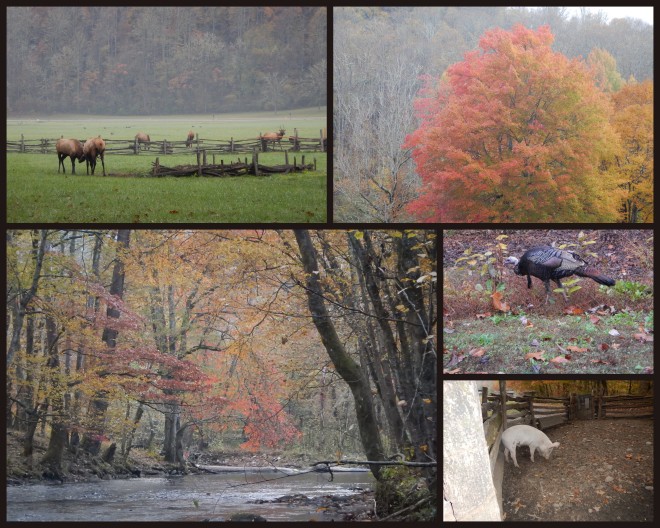 So what happened was…

We couldn’t find a truck stop but we saw a place that had lots of cars and probably a restroom so we stopped. There were a bunch of people looking at some turkeys and I was tired of being in the car so we went and looked too.  There was a flock (herd?) of turkeys walking around eating whatever they eat off the ground.  We have some in my neighborhood, but these were cooler.  After all, they were surrounded by fall leaves. Then I looked up and a couple hundred feet away was a herd of elk.  There was a dirt road leading that way and some people over looking at them so we went to see.  One of the elk came within a few feet of a lady, and as happy as she was about it I deemed going around the other side of the fence to look a better idea.  There’s just something about a huge wild animal whose butt is as high as my head that does not scream I want to pet that to me.

And then, this.
[youtube https://www.youtube.com/watch?v=2Cux_8236hE] You can bet I took that video through a fence and with a plan to jump up into the hayloft thing behind me if needed.  It seems I was the most paranoid person there.  After we started walking back a park ranger came by and started telling the elk (who mostly ignored him yelling and waving his arms at them) to get back away from the dumb humans.

It seems the elk were the males that had been chased across the river by the bigger, badder elk over there and they were all a wee bit frustrated and ready to fight. The ranger said they had been charging people and cars. AND CARS. Time to go!