World Oceans Day has been recognized by the United Nations since 2009. Before that it had been coordinated by The Ocean Project since 2002 and celebrated on a smaller scale even before that.

A different theme is chose each year, this year it is Healthy Oceans, Healthy Planet.

The oceans make up enough of this planet that I think it goes without saying that we can’t have one without the other.

The push this year is to use less disposable plastic.  They aren’t talking about not using any plastic at all – that’s pretty much impossible at this time.  Think about the one use plastic items that you use on a daily basis.  At first I thought it was a fairly easy challenge, but then I looked at the Marine Conservation Society’s Plastic Challenge Tip Swap and holy crap. It’s not just grocery bags that we throw away on a daily basis.  Its trash bags, toothpaste containers, milk/tea/gallon water containers, liquid soap, shampoo and conditioner bottles, the plastic that heads of lettuce and grape tomatoes come in, the list goes on forever.  It’s actually pretty intimidating. But what isn’t intimidating is choosing just one thing for now.  Maybe stop using straws, start using loose tea instead of tea bags, or bring your own bags to the grocer (not the most fun BYOB but still).

Personally I am going to try very hard to actually remember to bring in the stash of cloth bags I have had in my trunk for ages and to bring a net bag on my paddleboard for picking up trash I come across.  On Memorial Day I actually ran across an empty Cheetos bag floating in the water.  Really? 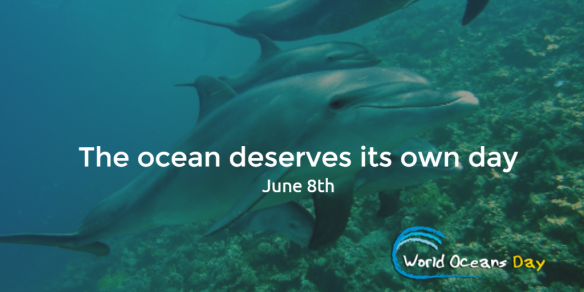 If you are bummed you didn’t find out about World Ocean’s Day sooner no worries, President Obama just proclaimed June as National Oceans Month.  So pick a one use plastic item and see how long you can go without using it.  And when you get used to going without that item pick another.  Because the oceans don’t just need us to keep them clean and healthy just one day or even just one month a year.

What one use plastic item can you do without?