Last weekend I finally ran a Spartan sprint at Raymond James Stadium.  Just about time. right?  I had a blast, as expected.  I couldn’t do all of the obstacles, as expected.  But I did hella better running up and down stairs than I thought I would.  Plus I didn’t fall once which is always a major win for me. Of course I did run into a stadium chair twice, leaving my hand looking kind of like I punched someone and a bruise on my leg the size of a saucer.  Not bad for me, I’ll take it.

This wasn’t a mud run at all, though we did go through some mud a couple of times.  So I guess not at all is a bit strong and untrue. Whatever.

It was a stadium run, which I didn’t really think about when I signed up (good thing) but which meant about a thousand miles of running up and down stairs.  Up got a wee bit painful after a while, down I was just terrified I’d trip and fall. Not that I would.

The funniest thing about the race (you know there are funny things about everything) is that just to get to the start line you had to get over a pretty high wall. Of course I needed a boost, but up and over is what matters, not how you get there.

The most FUN thing was they had jump ropes out of that really thick rope that cross fitters use and you had to jump with this huge rubber band around your ankles. And jumping over the fire at the end, but that’s a given.

So why does size matter? Because from the top of the ladder thing I could not reach the (curse word) monkey bars.  Yes, I tried on my tip toes. Anything I had to get over or reach up to was harder than it had to be for me.  However, crawling under the barb wire? Cake. I would not have wanted to be any bigger for that one, or for running between the stadium chairs! I guess it all evens out in the end. At least this run didn’t have the mud / water that some people walked through while I had to swim.  🙂

Here’s the course as they mapped it, but I am pretty certain there was a whole lot more weaving up and down the stairs than this map shows. 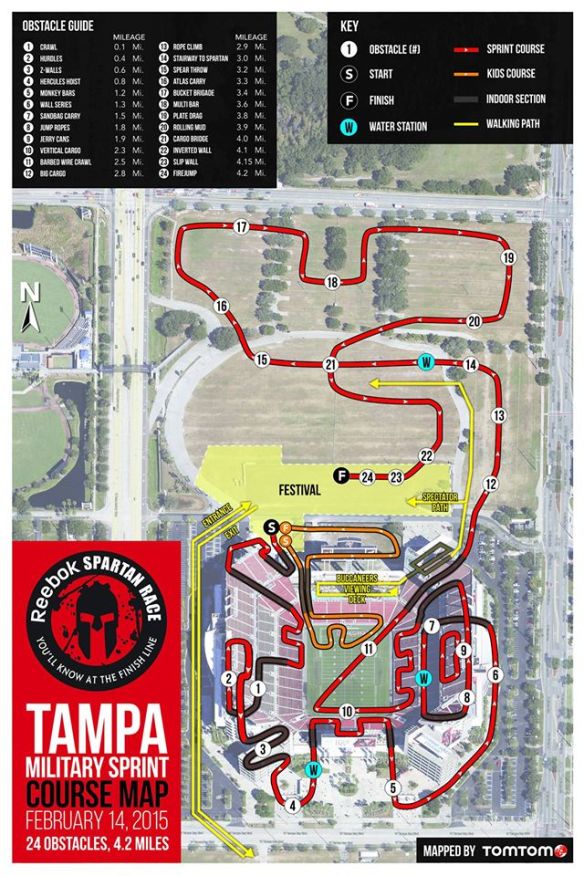 So what did I actually think of the race? I would do it again, for sure.  I’d even like to try the longer distance next time. But I will say this run is (fun but) less about having fun than most of the runs I’ve done in the past and more about proving something to yourself. There was nothing fun AT ALL about lugging a huge @$$ jug of water that seriously maybe weighed almost as much as me. I had to stop and set it down a few times. Didn’t really know how much I hated stairs till going up them with that thing.  But I did it and I did it without help.  There is something to be said for completing a task that you are seriously certain you can not do when you start it.

Maybe that’s why they say you’ll know at the finish line.

Leave a Reply to Sarah @ Sarah's on the Run Cancel reply