It’s been a rough couple of weeks.  I haven’t been blogging, I haven’t been running, I haven’t even been on much of any social media because sitting at the computer paying attention to one thing for that long has just been too much work. Heck, I’ve even been watching Netflix instead of reading which isn’t much like me.

On the animal front out of the 2 chickens I have left one began crowing – seriously.  I have  a third rooster out of my 4 pullets, and I can’t keep one chicken by itself so I’m looking for a good home for both of them.  If I try again I’ll for certain get them from a breeder instead of a feed store.  It never even occurred to me that they’d sex 3 out of 4 wrong. At least I live in an area where it isn’t too hard to find them good homes.

Also this week my 13 year old dog Lucky who has arthritis and nerve damage in her legs has begun randomly falling down even when she is just standing still.  Her legs have been bad and the other dogs have knocked her down before, but it wasn’t like this. Not fun but not unexpected. 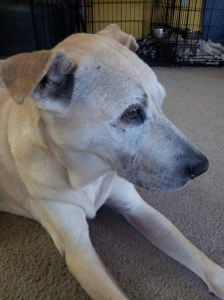 Oh, and my son brought home a little couple day old kitten who was the only survivor of a litter from a hoarder’s house.  We knew it had about 1% chance of making it but it started eating, made it through the night, and then didn’t make it through the next day.  I couldn’t tell my son to leave it to die but it was definitely a rough life lesson for the kids. I did use it as an opportunity to talk about how they made his last day so much better than it would have been and sometimes that’s all you can do.

These are things I can’t change.

I don’t like to sound so negative. On the plus side my other two dogs are happy healthy and obnoxious as always, the rats are healthy and playful as always, and the bunny is still awesome though she/he has decided that chewing on floorboards is a great way to pass the time.

On the everything else front my ulcerative colitis which has been in remission for an entire year is rearing it’s ugly head again.  It isn’t horrible yet, I usually feel a bit sick after eating or after drinking anything cold or carbonated but I still CAN eat and that’s always a plus. Half of the time I feel almost normal and the other half I feel like I’ve been run over by a bus.  I’m absolutely not up for running or even walking outside. Thanks to an insanely high deductible I really can’t afford to go to the doctor for it. I’ve decided it’s time to take things into my own hands and see if I can control it through diet.

I know what things make me feel sicker.  Being a vegetarian I don’t have to worry about red meat, which is said to make it worse.  Strangely I can’t eat any raw fruits or vegetables, everything has to be super-cooked. No booze though it seems I can tolerate sangria , I’m *trying* to be smart and not test that theory. But stress is a trigger too and some days it’s a toss up as to which is the worst of two evils.  Dairy is a trigger too. The doctor told me way back when to avoid glutton, but as a vegetarian we decided that would limit my food too much and it was never brought up again.

You might be surprised at how hard it is to follow the rules even when you know that breaking them will only do you harm.  There’s only one frozen pizza in the freezer, I’ll just eat it and then it won’t be there to temp me anymore.  I’ll just have a bowl of ice cream tonight, and then I’ll stop eating it…  till the next grocery store visit that is.

This is something I can change.

So I’ve decided it’s time to go all in.  For the rest of July I’m changing my vegan Meatless Mondays to every day, and going vegan for the rest of the month.  I’m not going to stock up on fake cheese and such, I’m going to try and eat real foods as much as I can.  I’m also cutting out wheat and rye.  I don’t plan on going glutton free but I am going to avoid most of it until I’m firmly back in remission.  Will it make a difference?  Only time will tell but it certainly can’t hurt.

I am making one exception if I feel good – Friday nights I usually go to the BarFly for dinner.  It’s a bar / mostly seafood restaurant in Safety Harbor. They’ve had nothing on the menu vegetarian but always let me special order vegetarian quesadillas or nachos anyways (and they make them GOOD). Then I went in last Friday and they had added both to their new menu!   Granted I’m sure other people were asking for them too, but I’m certainly not going to start asking them to modify their newly vegetarian menu items when they just added them! At least not yet.  🙂

So wish me luck and if you have any tips for a cheese addict going vegan or blogs you recommend let me know!

18 thoughts on “Catching Up”