This is the first time I participated in Lindsay’s Foodie Pen Pals.  I had fun looking for locally made items and even found some things I’m going to have to buy to try myself.

My package was sent by Shanon in Detroit.  Thanks Shanon!

She included a jar of Velvet Peanut Butter and a jar of Sander’s Hot Fudge so of course I  went straight out to buy a gallon of vanilla ice cream and we spooned a bit of peanut butter and fudge over the ice cream to try it.  My kids thought it was funny that I put peanut butter on their ice cream but we all agreed it was an awesome combination! 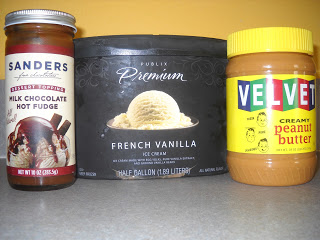 She also sent an assortment of Faygo soda which is was bottled in Detroit.  I haven’t tried them yet  but will!  I rarely buy soda so my kids are kind of drooling over it, I’m not sure I’m going to get any of that.

For December Lindsay is doing something a little bit different, instead of arranging for everyone to send and receive food packages she’s asking that her group of pen pals send the money they would have used for the food boxes to help those affected by Hurricane Sandy.  Her goal is to raise $1500, if you are interested in helping out please go to her site to read about it and sign up!